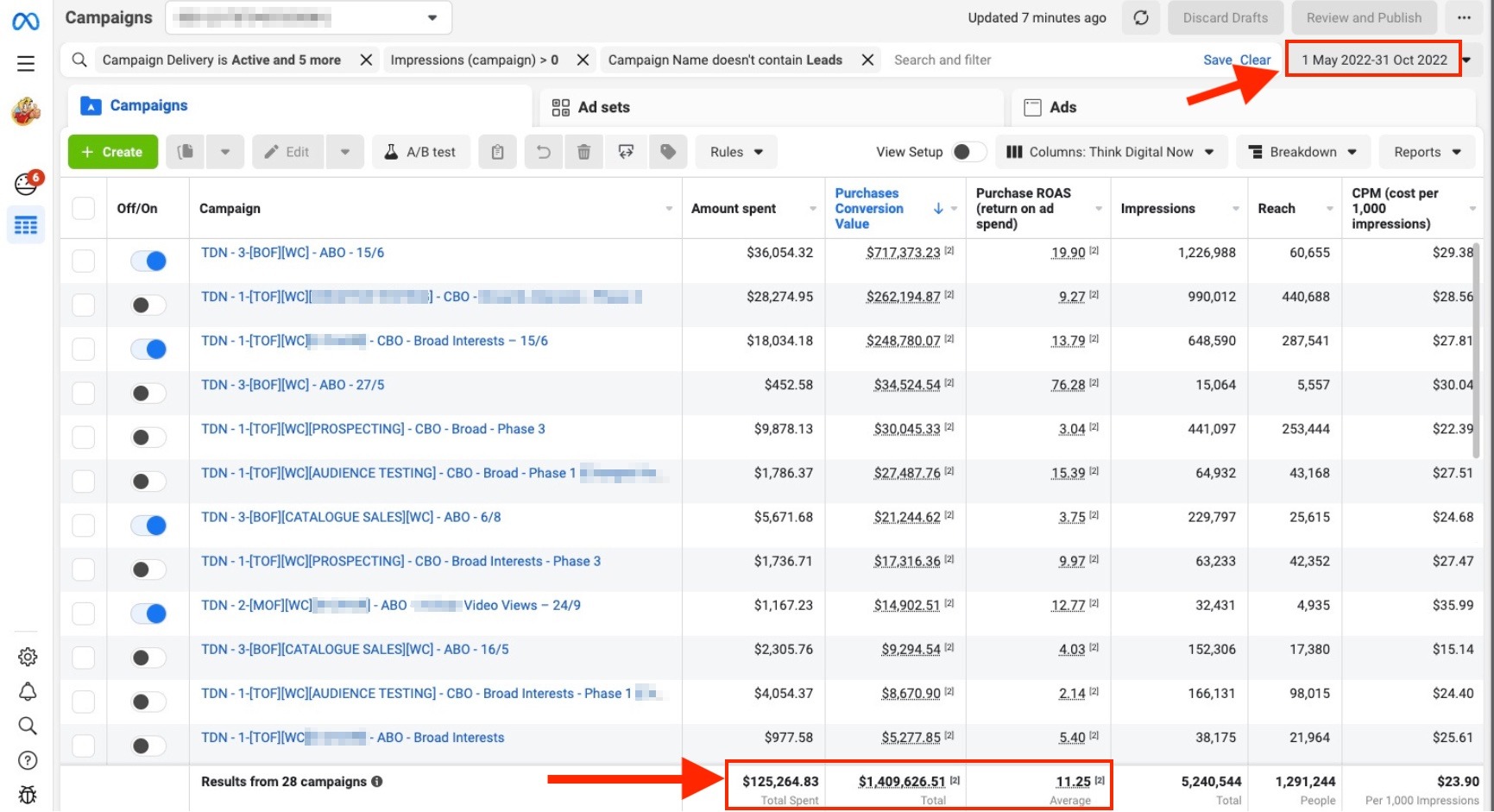 In this case study, we will show you how we helped one of our clients turn their Facebook Ads revenue
from 0 to $1.4M+ in 6 months with an incredible 11X ROAS.

We will also share some tips on how you can achieve similar results for your business.

At Think Digital Now™️, we work with a range of businesses to help them increase their Facebook Ads revenue.

This client in particular, who was experiencing a drastic decline in B2B leads and direct sales through their website, reached out to us for help.

We started working with them in February 2022 and took over their Google and Facebook Ads accounts. After extensive analysis of past data and research, we implemented our strategy and started with their Google Ads account.

We also wanted to use our own Facebook Ads strategy, which is known as the Facebook / Meta Ads Growth Programme.

Without further ado, let’s dive into this.

We will also share some tips on how you can achieve similar results for your business. 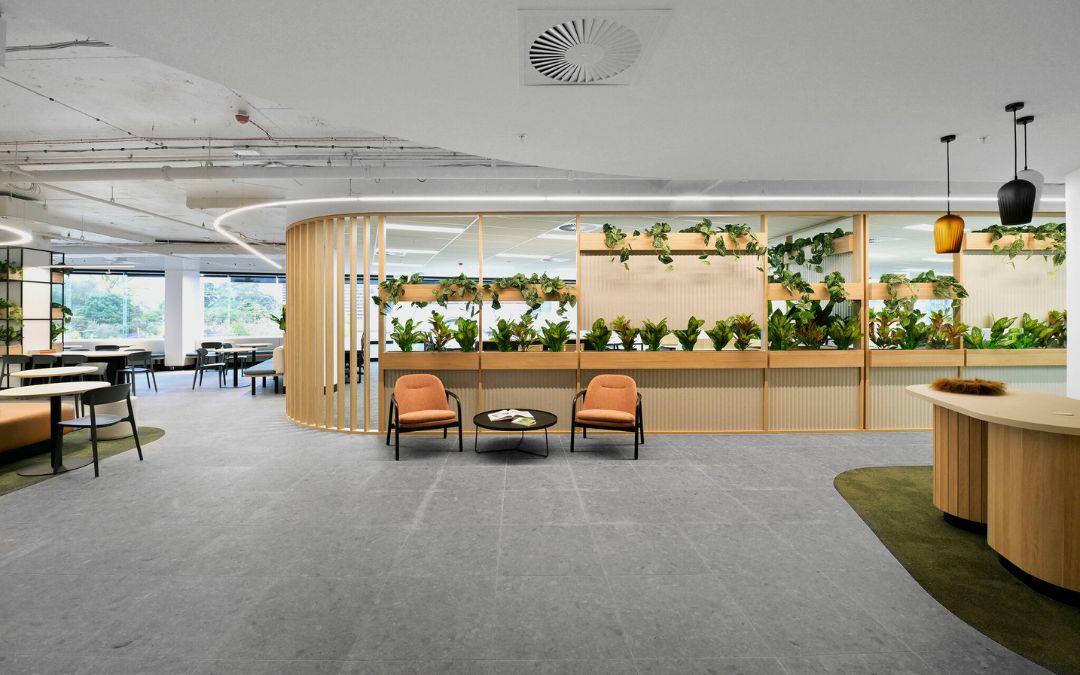 The client, BuyDirectOnline, is one of Australia’s largest online furniture & office supplies stores. They are a 100% Australian-owned and operated furniture manufacturing company with the largest range of office & home furniture at the best prices in Australia.

We proactively reached out to the client in late 2021 as we saw that although they were running Facebook Ads, there was a lot of room for improvement. At the time, they have been working with one of Australia’s largest PPC agencies for over five years. 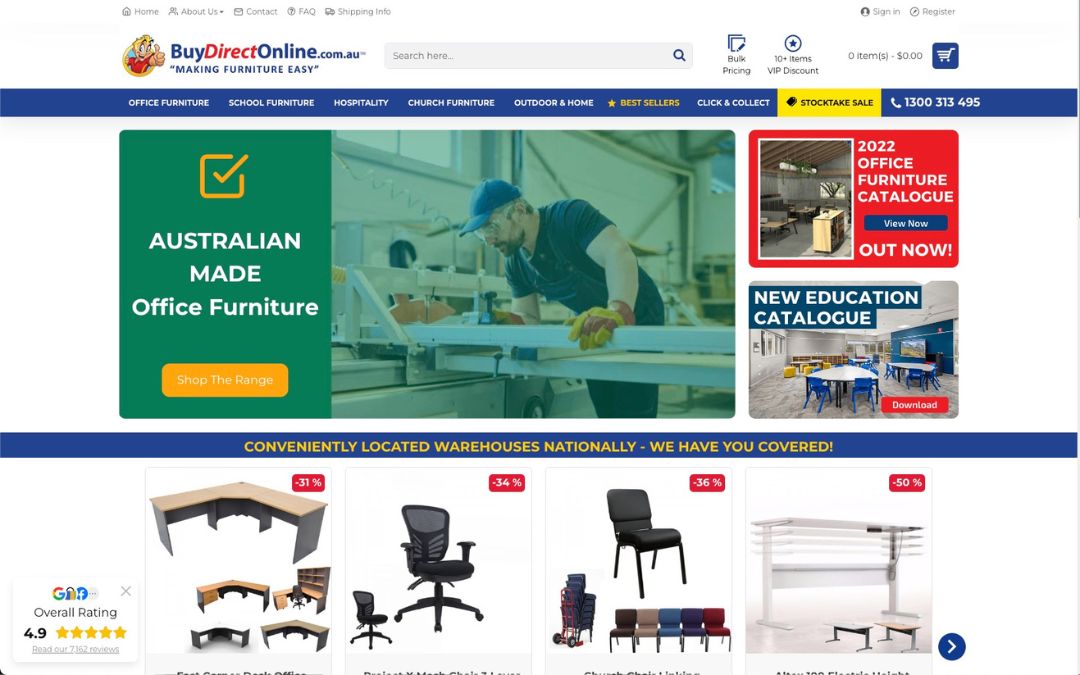 The problem that BuyDirectOnline was experiencing was that, after having worked with one of Australia’s largest PPC agencies for five years, they saw a drastic decline in B2B leads and direct sales through the website.

Their main concern was that if this trend continued, they would not be able to meet their annual revenue goals. This is why they reached out to us for help turning things around.

After some incredible growth during the pandemic, the overall performance of their PPC Advertising stalled, and the leads, sales and revenue had been drastically down.

This is why they made the move to work with us at Think Digital Now™️. They needed us to turn this around and increase it fast.

They had made most of their sales through their Google Ads advertising and saw no return through their Facebook Ads despite spending $5,000 each month.

When we started working with them, they did not even have their own Facebook Ads account, and we had to set up everything from scratch including technical setup like pixel events through browser and server (CAPI) tracking.

We started working with them in February 2022 and took over the accounts. After extensive research, we implemented our strategy and started with their Google Ads account.

We will cover this in a separate case study.

We also wanted to use our own Facebook Ads strategy, which is known as the Facebook / Meta Ads Growth Programme.

The First Month Working with Us

In the first month of working with us, they already saw a 22% uplift in total revenue in March 2022 compared to the previous month.

After getting their Google Ads back on track we started working on their Facebook Ads account from scratch at the beginning of May. Compared to Google, we only spent $2,078 for the whole month of May, and got them a return of $21,516 – an amazing 10X ROAS in the first month of running their Facebook Ads!

This is our Bulletproof Testing Framework™️, and within it Audience & Creative Testing. We use a method of pre-testing audiences and creatives to find the right mix for our main campaigns: those that will grow sales or leads and consistently increase revenue later on down the line!

This is an important pillar because without testing these two things beforehand there can be no stability when launching ads – and we don’t want any accidents happening along with all this hard work do you?

The perfect avatar – imagine being able to customize your own newsfeed! Personalizing advertising is the name of this game, and it starts by building out details about who you are targeting.

The campaign’s goal was to both convince business owners and get the attention of consumers who want an office upgrade.

To know which audiences and ads work, we conduct separate campaigns for broad and interest-based audiences. At this stage of testing we only use one ad copy across different advertisement sets so as not to bias our findings with any particular target group’s preferences or habits (elderly people might not care much about furniture). For the former case where age is considered an important factor; both males AND females between 18 years old up until retirement age were targeted.

At this early stage in our campaign testing, we used one ad copy and creative for both Broad audiences as well as Interest based. This way it’s easy to see what performs best with different types of people before committing more money into specific targeting options like age or gender later down the line when needed!

We have seen some incredible results early on during the testing in May and June. Usually during Phase 1 testing we optimise the campaigns for either Add to Cart or Initiate Checkouts. Getting sales is not even a KPI here, however it’s a very promising side effect.

This was the perfect start for our testing with a brand new ad account, where we literally started from scratch with no past purchase or pixel data.

We already saw that broad audiences worked incredibly well, and we were now able to create a Phase 2 campaign for testing creatives, more ad copies, CTAs and different landing pages.

For interest based audiences, we cycled through 20+ interests and eventually also found the right audiences to move into Phase 2 testing.

For broad audiences, we keep them wide open and only segment by age groups. We did adjust the ad copy for younger demographics. Overall broad audiences performed extremely well and as you can see below outperformed actual interest based targeting by a factor of 3!

We’ve got the perfect ad for you. With BuyDirectOnline’s nearly 4000 products and 100s of bestselling furniture items, we wanted to put focus on their USPs. We created ads for the best selling products in the past 180 days.

It’s been said that sometimes less is more. Well, this has certainly proven true in our case when it comes to Facebook Ads and video ad.

We tested the best of all different creative options during Phase 2 Creative Testing:

We also understand that sometimes people don’t always click on an ad or even see them when they’re posting online – so our team created these ads with only 3 things in mind: We want the user Stop & Take Notice; Engage & Take Action.

Depending on the market, you have most likely experienced that when it comes to Facebook Ads, the platform is almost saturated with video ads. In the past 12 months, we started seeing a new trend towards animated images and GIFs. Nevertheless, we always cycle through all different creatives, e.g. images versus videos versus GIFs, and we saw much higher CTRs for GIF and static images for BuyDirectOnline.

As usual, there are always few winners when it comes to ad creatives, and in our case we struck on gold with this simple yet powerful ad.

Total spend of $55,629 for this ad alone, which generated a total of $353,354! At the beginning of October we had to retire this ad because the product is now officially sold out.

Parallel to this product ad we advertised 10+ of their best selling products and also created a proper retargeting strategy.

After Six Months of Working with Us

We also advised them on many other parts of their overall online presence like conversion rate optimisation on their website by adding a reviews widget as they hadn’t utilised their more than 7000 reviews across all reputation management sites at all.

We also helped them with their lead campaign landing pages, and also created an automated abandoned cart email sequence they had not been using before. In the first month of working with us, they already saw a 22% uplift in total revenue in March 2022 compared to the previous month.

How Are We Able to Get such Results in a Post iOS14.5 Advertising Era?

Yes, Facebook Ads can still be a very powerful tool for businesses of all sizes.

They can be used to reach new customers (Top of funnel), drive traffic to your website, and increase sales.

Of course you already knew that. 😊

You also knew that attribution became a major headache since Apple decided to change their privacy settings on all their iOS devices. They introduced iOS14.5 in April 2021 and both advertisers and brands had to adjust and the good old days of 28 days attribution were gone for good.

However, as advertisers we have to be optimists in a very fast paced industry. Changes are coming and going, however evergreen advertising strategies worked 100 years ago and will also work in 100 years from now.

We always do our best to adapt as quickly as possible. Although there is no magic bullet to fix this attribution issue that Apple has forced on us, there are workarounds and in this case study you will see that Facebook Ads are still a very powerful advertising tool if used effectively and with the right strategy. Because the last thing we want is wasted money or time!

The most important factors in a successful advertising campaign are a balance of high-quality traffic and an optimal CPM cost. To achieve this we always test different types of ads on various objectives with creative testing as well. This way we can find out which ones work best and create stable campaigns, which can be optimised and then efficiently scaled over weeks and months.

Ready To Make a Real Change?
Let’s Scale Your Brand Together!

I AM READY TO SCALE UP